A most interesting article has been posted on line and brought to my attention by its author:

Sorokin was a student at the Psycho-Neurological Institute.

As Soldani notes: “The Institute offered medical training of the highest order, but its students’ revolutionary tendencies were becoming a concern for the government. In 1912, the mayor of Saint Petersburg had reported on political activity among the capital’s students. In margin of the section on the Psycho-Neurological Institute, Tsar Nicholas II had written, “What benefit does Russia derive from this Institute? I wish to have a well-founded answer”. In the spring of 1914 the minister of public education presented an additional report on the anti-governmental attitudes of Bekhterev’s students and recommended the Institute’s closure.” 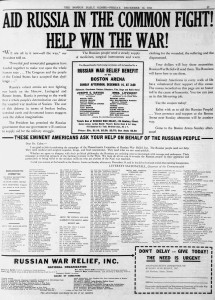 “There were other interesting ways in which intensity of feeling showed itself in irrational ways, showing how human good scholars can be.

“During my editorship of the ASR [American Sociological Review] the president of SSSP [The Society for the Study of Social Problems] sent in a proposed constitution for that organization, requesting that it be published in the ASR. Since the Review never had a policy of printing constitutions of other societies (or even that of the ASA!), the paper was returned. My reward was a denunciation in a Council meeting and a further drubbing in a letter to the president of ASA, with copies to various other leading sociologists.

“Even more absurd was a request from P.A. Sorokin, who demanded that I publish a statement accusing Talcott Parsons of plagiarism from Sorokin’s works. This was not the product of a reasonable mind; his principal argument was that Parsons had based a theory on the three elements of society, culture, and personality–an idea that was clearly in the public domain. On receiving a rejection, Sorokin responded with an angry letter, threatening to publish the statement elsewhere and to add that it had been refused by me, Editor of ASR. I terminated the correspondence by writing that if he did, he should add that the Editor had submitted the statement to every associate editor and that each one had recommended against printing it. I never learned if he attempted to publish it elsewhere.”

Posted here as a PDF file:

Perspectives of a Contemporary Critical Realist: An Interview with Don Martindale

Martindale makes personal observations about and comparisons between sociologists such as Sorokin, Talcott Parsons, Robert Merton, and C. Wright Mills which some scholars may find interesting.

Posted here as a Word document are fascinating excerpts pertaining to Sorokin from History of Sociology at the University of Wisconsin-Madison; Volume 1: Challenges, Ups, and Downs, 1874-2016 by Russell Middleton (Madison, Wisconsin: Anthropocene Press, 2001).

I am happy to give you my permission to cite and quote from my discussion of the relationship between E. A. Ross and Pitirim Sorokin. Ross strongly disagreed with Sorokin’s view of the Soviet leaders, but he was taken in by Soviet propaganda. Nevertheless, he had great respect for Sorokin as a scholar and played a major role in helping him land a job at the University of Minnesota and later as chair of the Sociology Dept. at Harvard.

When I was a graduate student at Minnesota in 1951 there was a joke circulating among the sociology graduate students that Sorokin had read every book in the library. I almost came to believe it when I was looking for some good French sociology texts to use in practice for my French reading exam (which was required for the PhD then). In the stacks I pulled down some very old issues of L’année Sociologique, the famous French journal of Durkheim, Mauss, etc. I was startled to see that Sorokin was the last (and only) person who had checked out the volume in all the years since Sorokin had taught there.

When I run across people who argue that Lenin was a decent leader, in contrast with Stalin, I tell them to go read Sorokin’s autobiography.

I wish to thank Professor Middleton for giving me permission to post these excepts from his book.

“Mrs. Pitirim Sorokine on Way to This Country Now” 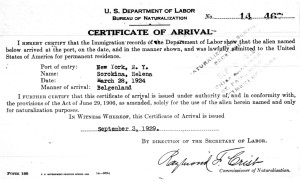 published in The Daily Illini (The University of Illinois)

Sorokin, who arrived in the United States only a few months earlier, was on a lecture tour.

Posted here as a PDF file is the following article:

Sorokin was teaching a summer session course at the University of California at Los Angeles. The interview gives a warm, lighthearted view of Sorokin as person.