published in The Daily Illini (The University of Illinois)

Sorokin, who arrived in the United States only a few months earlier, was on a lecture tour.

I have not seen this photo before. 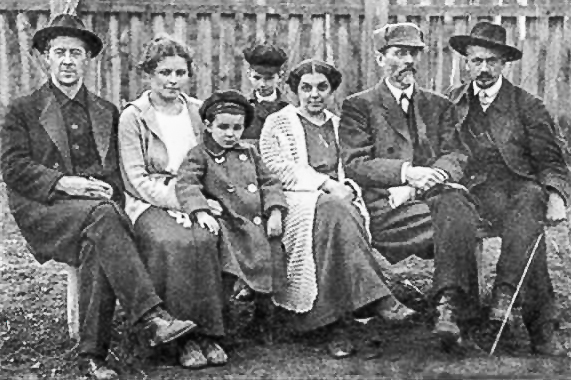 Pitirim and Elena Sorokina. 1921, Tambov (next to Elena – presumably her half-brother; her father is second from the right)

The photo was taken the year before Sorokin was exiled from Russia. His wife left to join him in the United States in 1924.

Students and teachers of the Jurisprudence Faculty of the Imperial Saint-Petersburg University, around 1913-1914. Standing in second row: sixth from right: P. A. Sorokin.

Such a handsome young man. Sorokin was age twenty-eight at the time. In his face and expression, one can see the earnestness and idealism that would manifest itself in his life and writings.

This photo appeared in The Christian Science Monitor (published in Boston, Massachusetts) in the following article:

On the evening of March 9, the day the article appeared, Kerensky spoke at the Ford Hall Forum in Boston. His lecture was entitled “On Behalf of Democracy.”

In the conclusion of the article, it is stated: “The last meeting between Mr. Kerensky and his secretary [Sorokin] occurred nearly 18 years ago in Berlin. This was four years after Mr. Kerensky’s escape and already the Soviet Regime was sending its roots into Russian soil. Yet like his former superior, Sorokin believes the Soviet Union some day will collapse.”

This photo of Sorokin in the yard of his Winchester, Massachusetts home appeared in the Boston Sunday Globe of May 23, 1954 under the headline “Winchester Hillside Aglow With Azaleas, Grown by Harvard Professor.”